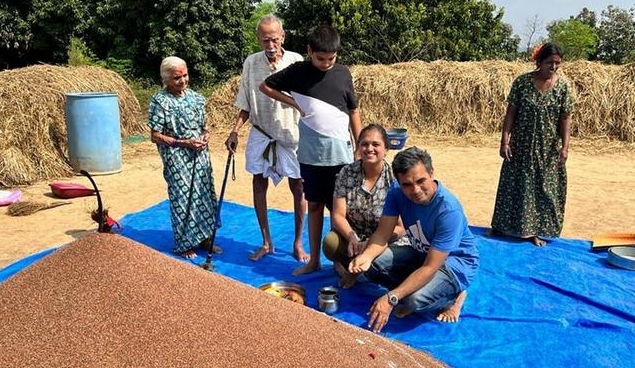 In India, climate change and human encroachment have led to more and more wild animals looking for food in the fields. The farmers want to keep them away with noise and light.

Raghavendra Bhat has been running his organic farm for six years. It’s in the middle of the forest, very close to Bengaluru in southern India. The city is considered the technology stronghold of the country. When he gave up his office job in 2014 to start his own business as an organic farmer, he had no idea what was in store for him.

Because monkeys are up to mischief on the six-hectare property. At first he was kind to them.

“At some point, however, hundreds of them came and attacked the banana plantations. Eventually they even broke into the house and threw themselves on the workers,” says Bhat.

“That was also the point at which we realized that we were dealing with a real threat here and that we had to do something.”

The monkeys now come to the fields so often that Bhat recognizes individual animals from afar.

“One of the monkeys doesn’t have a tail. He’s probably the leader. Every year he comes to the fields here with a larger group,” says Bhat.

Wild animals in search of food

Because climate change is progressing and humans are encroaching further and further into the habitat of animals, it is becoming increasingly difficult for wild animals to find sufficient food in their original habitat. That’s why her search for something to eat has long led her to the fields of the people.

This is a disaster for farmers. Due to irregular and sometimes heavy rainfall, they already have to complain about considerable crop failures. They simply cannot afford to lose any more of their crops to wildlife.

With firecrackers, electric fences and even poison, some farmers are trying desperately to keep the animals off the fields. But monkeys and elephants are smart. Some farmers try to deal with them using gentler means.

Bhat now loses at least a fifth of his income from foraging monkeys and elephants. But it could be a lot worse. When the attacks of the monkeys became almost unbearable about five years ago, he first decided on an arduous way to get rid of the pests: With the help of bait, he caught about 25 animals one after the other and released them about 100 kilometers away in a forest out.

“It wouldn’t bother me if they just ate their fill and left,” says Bhat. “But the monkeys pick up to ten fruits, whether they’re bananas, guavas, mangoes or sapotes, bite into all of them just once and then throw them away. Sometimes they eat a fruit whole, sometimes not.”

Bhat constantly wonders how farmers here are supposed to cope with the twin burdens of wildlife attacks and the effects of climate change. Almost 90 percent of his last pea crop spoiled. It rained far too much at unusual times. The crop just rotted.

“Imagine the same thing happening to a small farmer who depends solely on this income. Many of the farmers with the small farms finance their expenses with loans in advance. But they have to pay them back even if they lose their crops,” says Bhat. “Now imagine that monkeys or other wild animals destroy the remaining 10 percent of the harvest. Such a farmer will not be able to survive economically the following year.”

In December last year, a guest visited Bhat’s farm. Upon seeing the monkey plague, he told Bhat about a bioacoustic device being tested in northern India to scare away monkeys. The solar powered contraption has motion sensors. When the monkeys appear, it plays the roars of lions, tigers, leopards or even gunshots to scare the animals away.

Bath then sat down with S.R. Ayan from Katidhan company. The company has developed the technology to deter wildlife. Company founder Ayan once wondered how to change the animals’ behavior without harming them.

“By attacking your senses,” says Ayan.

During the development phase, the company also tested sprinkler systems. As soon as the motion detectors go off, water should drive the intruders away. However, the desired effect did not materialize.

“When we started, the monkeys were actually a bit excited. They thought the water was coming straight at them. But after a day or two they started playing with the water,” says Ayan.

Only after that the developers began to experiment with sounds. Since they knew about the intelligence of the animals, they programmed the devices so that a different sound is played every week to scare the animals.

Such a device is expensive at $130. Bhat can afford it from the reserves from his office job. Many other farmers do not have the means to do this. More than half of the Indian workforce is financially dependent on agriculture. And there are hardly any alternatives. Most own less than two hectares of land. That’s about the size of two soccer fields. These pawns are struggling to even make ends meet.

Since 1980 there have been 59,000 suicides in India due to climate change. A 2017 study by the University of California, Berkeley states that poor harvests left farmers with no other way out. The scientists also predict that for every one degree Celsius increase in temperature in each harvest season, 67 additional suicides will occur.

Malan Raut lives in the western Indian state of Maharashtra. The 35-year-old owns two hectares of land right in her village. Two years ago she lost her entire harvest in floods. She had been growing fenugreek for the past year and was hoping to recover financially from the shock of the previous year. The floods did not happen, however. But now the deer came, threatening their harvest.

“The deer just pulled everything off and only left the stalks,” she says.

She lost the equivalent of $1,000 last August. So she also got technical help in the bed; also developed by Ayan’s company.

A scarecrow has been watching over a hectare of their land ever since. Instead of a straw or clay head, this specimen has a small box on its neck. The device flashes all night long to scare the animals away. For now this worked. This year, Raut’s fenugreek survived. The technology is operated with solar power. Raut was lucky: an agricultural women’s cooperative had donated the device to her.

But the technology also has disadvantages. So Raut’s neighbors also scare away the animal intruders on their fields with noises, very similar to Bhat.

But that disturbs the peace and quiet, Raut complains. In addition, critics say that the animals can get used to light and noise.

For the World Resources Institute, an environmental organization from the USA, Shaurbh Anand is investigating conflicts between humans and animals in India. He says that although the monkeys are frightened at first, over time they ignore the shrill noises and shamelessly continue raiding farms.

“We found that acoustic deterrents are not effective at scaring the monkeys away,” reports Anand.

For now, Bhat has attached his monkey scare to a 10-foot-tall power pole at the west end of his farm. This puts the device far enough away from his house that the noise doesn’t bother him. But Bhat has also noticed that the monkeys get used to the sounds.

“I saw the monkeys coming, the noise started and they ran away,” he says. “But since the monkeys are smart, they now avoid this entrance, they just come to my field from different directions now.”