Huge numbers of leaders and workers from different political parties of Sikkim have joined the ruling Sikkim Democratic Front (SDF) party at a public meeting in Jorethang of South Sikkim on Wednesday. SDF president, the Chief Minister Pawan Chamling has welcomed them in the party. 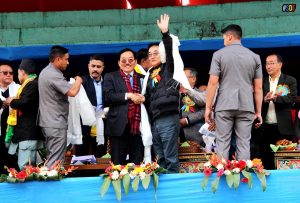 It is informed that a total of 4,700 leaders and workers of different political parties have joined the ruling front. The joining includes a senior politician and former minister, R B Subba, former minister, K N Upreti and other senior leaders and workers of Hamro Sikkim Party (HSP), former Mayor of Gangtok Municipal Corporation, K N Topgay, a founding member of Sikkim Krantikari Morcha, Birbal Subba and supports of SKM party and others. It was also the home coming for many leaders.