Meanwhile, Churachandpur police, on January 8, conducted a drive against illegal poppy cultivation at Songpeh and Molneiphai under Sangaikot Subdivision. A combined team of Narcotics and Affairs of Border (NAB), Imphal East along with Saikul police, district administrative staffs, home guards, Imphal East district police and one column of 15 Assam Rifles and department of Horticulture and Forest destroyed about 70 acres of illegal poppy plants.

The illegal poppy plants were found growing at the Maharani hill range, which is under the jurisdiction of Sagolmang Police Station. Destruction of the poppy plantation was initiated as a part of the state government's 'War on Drugs' mission to root out drugs for a drug-free Manipur. As a part of the mission, various drives have been conducted by different district police supported by local bodies.

Meanwhile, several prominent women's organisations have opposed the verdict passed by the ND&PS Special Court on December 17, 2020, about the multi-crore drug haul case in 2018. They also submitted memorandums to the Governor and the Chief Minister urging the Government to move an appeal at the High Court of Manipur against the verdict.

Representatives of several women organisations led by the All Manipur Women's Social Reformation and Development Samaj (Nupi Samaj) president Th Ramani marched towards the Raj Bhavan and the Chief Minister's Office from the Lamphelpat office of Nupi Samaj at around 11.30 am on Friday. But the activists were blocked by a police team near the Lamphel traffic island which resulted in a brief stand-off. 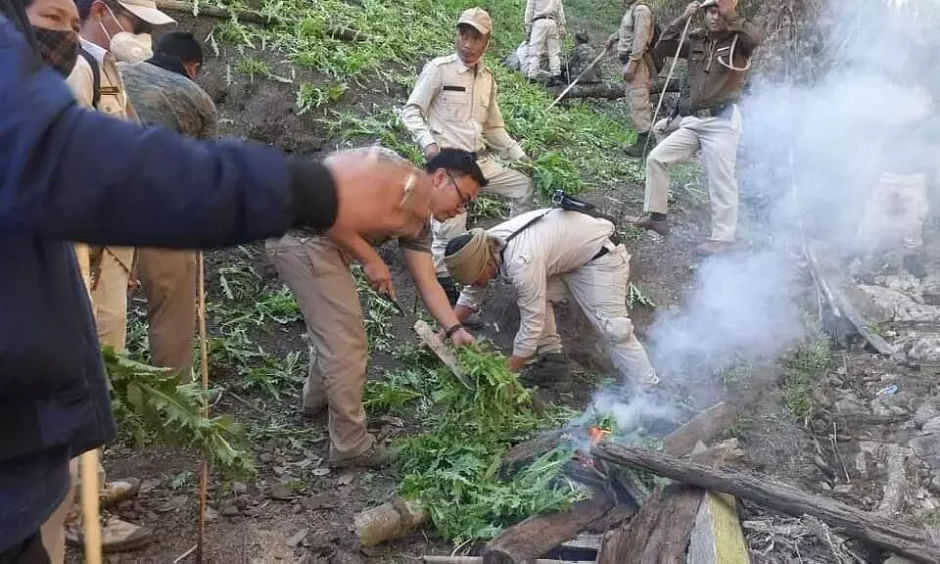 Notably, in the year 2020, 910 acres of poppy plantation has been destroyed in Ukhrul district; 190 acres in Senapati district; 120 acres in Kangpokpi district; 50 acres in Churachandpur district; 30 acres in Tengnoupal district and 15 acres in Imphal East district.

On the other hand, Assistant Superintendent of Police (ASP) Thounaojam Brinda returned her Chief Minister's Gallantry Medal she received it for cracking the 2018-drug case on December 18. The development took place after the Special Court (ND & PSA) Manipur ordered the release of the accused BJP Autonomous District Council (ADC) Chairman and six others.