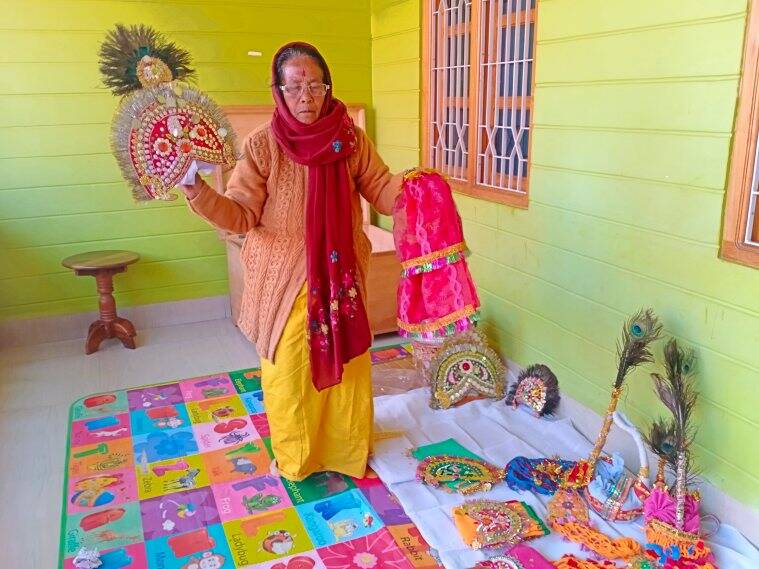 Hanjabam Radhe Devi is not your everyday octogenarian. At 88, the Potloi Setpi (traditional Manipuri bridalwear designer) still has a spring in her step as she goes about dressing brides with her exquisitely tailored apparels.

Hailing from Wangjing Sorokhaibam Leikai in the Thoubal district of Manipur, Radhe Devi pledged to dedicate her life to designing bridalwear at the age of 25 and 58 years and numerous satisfied clients later, her unstinted devotion to her craft has finally got her a deserving token of acknowledgement. The 88-year-old, who, by her admission, has lost count of the number of brides she has designed or draped, is to be honoured with the Padma Shri, the country’s fourth-highest civilian award, this year. The list of awardees was announced on Republic Day.

“I was extremely nervous when I heard that I have been chosen to receive an award from the Union government. I had never expected to win such an honour. I had to splash some water on my head to compose myself. The first thought I had was of my late Ojha (teacher) from whom I inherited the art of making potloi. I thanked the Almighty for showering his blessings on me,” said Radhe Devi, who is locally known as Abok Radhe (grandma).

She said that ever since childhood, she has been fascinated by the idea of a makeover, especially when it comes to designing clothes. “When we played, I would often take the role of a fashion designer, dressing up my friends,” she recalled.

However, the innocent thrills and joys of girlhood gave way to the more serious business of tending to a household different from her own after she got married to Hanjabam Mani Sharma, now dead, at the age of 15. Buried under the weight of household chores, she lost her interest in fashion only to rediscover it in the latter part of her married life, she said, adding that crossing all the hurdles that came in the way of following her passion was like waking up from a bad dream. Radhe Devi said she took her starting lessons in Potloi designing from Thounaojam Priyosakhi, a woman in the neighbourhood whom she called eche (elder sister).

As her husband, who was an astrologer, struggled to make ends meet with the minimal amount that he brought home, Abok Radhe had to shoulder the burden of livelihood to keep the kitchen fire burning. She did so by selling pakodas (fritters) at a roadside stall.

“There were times when we didn’t have enough money to buy rice,” she recalled, her eyes welling up.

Seeing Radhe Devi, who was in her twenties at the time, struggling to make a living, Thounaojam Priyosakhi asked her to lend a hand in Potloi dressing as an apprentice. It was the moment which brought the much-needed turnaround in her life. She recalled how she started making her own Potloi at the age of 30 and how slowly, but surely, her business flourished. However, she did say that her initial years in the bridalwear business involved a lot of struggle as there weren’t too many Potloi dressers at the time. Adding to the challenge of making her business success was the fact that she also had to devote equal time to her household.

“There were only a handful of Potloi dressers back in the day. Even in our Wangjing constituency, there were only two of us, the other being eched Priyosakhi. And making matters worse was the fact that most of our wedding ceremonies take place at night and there was no public transportation at the time to enable us to travel to neighbouring districts. Sometimes, my children went to bed hungry as I was away,” Radhe Devi recalled.

Abok Radhe said she honed her skill under the watchful eyes of Khurailakpam Iboton Sharma, a dancer and Potloi dresser.

Potloi is the traditional bridalwear of majority Meitei Hindu women in Manipur. It was initially introduced by Maharaj Bhaigyachandra (1769-1798) for Manipur’s classical dance presentation “Ras-Leela”. It has a cylindrical shape, dotted with embellishments. It is worn around the waist. During “Ras-Leela”, Potloi is worn by the gopis. Later, it came to be used as bridalwear for the Hindu-Meitei wedding.

Apart from Potloi, Radhe Devi also makes traditional dolls and attires for religious purposes. All the products are handmade by her, with a bit of help from her eldest daughter Ibena Longjam, who is also an apprentice in the trade.

“During the Lai Haraoba, (festival of gods) people from different parts of the state flock to our house to purchase my mother’s items,” said Longjam, adding that Abok Radhe simply refuses to stop working and retire despite requests from her family members.